Voice of Cards: The Isle Dragon Roars, at first glance, appears like a traditional JRPG but with cards. Yoko Taro and his team have always been known to take an existing formula and turning it on its head, taking liberties with the storytelling that requires trust and patience. The payoff is usually worth it, more often than not.

Making an appearance at the recently concluded Nintendo Direct, we’re shown a game that’s literally made of cards – an entire epic spanning a full story, characters, world, combat system, and even its own mini-game involving… well cards.

It sounds like a concept that can easily be dismissed but we would caution against it because Voice of Cards: The Isle Dragon Roars is loads of fun and even quite captivating, as it takes elements of classic JRPG’s and presents it in a whole different way that is fresh and interesting.

It’s called Voice of Cards for a reason

In Voice of Cards: The Isle Dragon Roars, the voice that guides you through this adventure really reminds me of a Dungeon Master in a tabletop RPG, who is your window to the world and the adventure. I usually default to Japanese voice acting almost always but in this game, I gave Todd Haberkorn (Adachi from Persona 4) a chance, as he usually does a good job with his voice acting work. I tried both language versions, and they both have their own take on the tale.

The biggest thing that I noticed with Voice of Cards: The Isle Dragon Roars is how the mood of the game switches with which version you take. The Japanese voice actor feels like they’re taking the role of Yoko Taro talking to the audience and dishing out his signature off-beat humor. It’s a more light-hearted take on the story and it’s amusing how self-aware this voice is when you try to veer off the linear path it has laid out for you to take. It’s so funny how it keeps reminding us that it’s a demo and we have to wait for the final version to get full the experience.

Todd Haberkorn has a more sardonic take on the adventure. He sounds exhausted, he’s told the tale a hundred times and he’s telling it again, but he has to do it. While the Japanese voice seems more off-beat, the impression I’m getting with Haberkorn’s take is that it’s more serious, more grounded, and you know the story will not remain as conventional as the demo suggests. There’s more to this tale than meets the eye, a foreshadowing for things to come.

The art style is beautiful and cards have flavor text narrated by the Dungeon Master. To top it off, when you unlock new cards through the story, they become a permanent part of your collection.

The entire world works like a traditional RPG: you receive a quest from your queen to search for a vial that’s so precious to her, she’s willing to grant our adventurers a wish of their own. Your party is led by Wynifred the White Mage and is accompanied by a fighter and a sage.

Each skill Voice of Cards: The Isle Dragon Roars is represented by a card, and you gain actions by collecting gems throughout your random encounters. A basic action grants you a gem and using special actions expends gems. You can collect up to 10 gems at a time, and you win a battle by getting your enemies to 0 HP. As usual, enemies have elemental weaknesses and critical hits grant you a follow-up attack.

Traversing the map made of cards, each face-down card square represents a part of the map, and moving to a face-down card square unveils what’s underneath. You can reveal areas of the map such as dungeons and towns, and you also could reveal treasure. Random encounters plague your journey and events reveal a unique sequence where you don’t necessarily enter combat but give you choices on how to proceed that may lead to combat, treasure, or other surprises.

In my two-hour playthrough of the Voice of Cards: The Isle Dragon Roars demo, I encountered one town, one dungeon, and a limited amount of the map. While it is the prologue, there’s something about the game that’s relaxing and also intriguing that really wants me to play and learn more about it.

A curious and ironic mechanic introduced in Voice of Cards Voice of Cards: The Isle Dragon Roars is the mini-game Card Parlor that allows you to play an Uno-style card game against AI-generated opponents as well as other human opponents through multiplayer. As if we aren’t reminded enough that the current game that we’re playing is a card game, we get another card mini-game of our own that is on par with the Triple Triad card game it’s based on.

It is an Uno game through and through, as each player draws two cards and creates a combination of either pairs, triples, or a consecutive straight to make it a part of their board. The basic game is straightforward enough, yet as you add more rules such as Event Cards, Effects, and even more players, it becomes a card game for the ages.

Completing certain pairs or triples activates card effects that affect other players or give you a little bit of a boost. Completing a set of eights, for example, gives you an option to roll a dice to destroy card sets that your dice granted. Or completing a set of aces turns the numerical value of your opponents’ cards to one.

It’s not as addicting as GWENT or Triple Triad because there’s no collectible option for this game but it’s still fun for what it is and free items are free items.

I’m extremely hyped for Voice of Cards: The Isle Dragon Roars next month. The RPG format is familiar, but the presentation really makes it fresh. I’m curious to see where the story will take me matched with Keiichi Okabe’s beautiful music. Finally, the card collection aspect really is exciting as every card could be added to your collection, flavor text and all. It is like buying a board game and going on a scavenger hunt for its pieces.

Voice of Cards: The Isle Dragon Roars will launch on October 28 on the PC, PS4, and the Nintendo Switch. 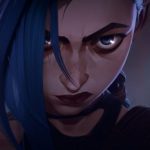 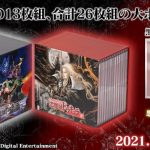