Ghost of Tsushima Director’s Cut is now available and in our review, we called it “a standout experience especially on the Playstation 5”. There’s a lot of new content care of the Iki Island DLC and with it, a new set of trophies for everyone to unlock.

In particular, there is one trophy in Ghost of Tsushima Director’s Cut that’s quite the puzzle to unlock, and it is called “Monkey See”. The official description says “Embody the spirit of the monkey on Saruiwa”, which really doesn’t give any clues on what needs to be done.

Spoiler alert: This guide shows portions of Iki Island, please avoid reading further if you want to uncover the secrets on your own.

Saruiwa is a place on the lower-left corner of Iki Island from the Ghost of Tsushima Director’s Cut DLC. The area holds a tall mountain to climb and on top will be a Monkey Sanctuary that you can unlock to complete all of the sanctuaries in the game for another trophy. Head to the area and begin the trek up the mountain.

As you slowly climb up, you’ll notice certain branching paths that will lead to areas with markings on the walls and a monkey statue depicting the “See / Hear / Speak no evil” gestures. They’re not hard to miss, and to be quite honest, all of them can be found on your way to the top.

The first one you’ll encounter is this painting / monkey pair:

Once you see the crow painting, you’ll know you’re on the right track. Continue up the path and you’ll see a “Hear no evil” monkey statue. What you’ll need to do now is to play any song on your flute to trigger a short cutscene. You’ve now done 1 of the 3 requirements for the trophy.

The second painting / monkey pair is this:

Near the area, you’ll need to crawl down from a number of ledges until you reach a little alcove with the “See no evil” monkey statue. What you’ll need to do now is to throw a smoke bomb to fulfill the second requirement. You’re now 2/3 of the way there!

The third and last painting / monkey pair is further along the mountain, and you’ll need to swim across a small pond to get there:

After your short swim, you’ll see the “Speak no evil” monkey statue. What you’ll need to do now is to do the bow command (swipe down on the touchpad) to fulfill the 3rd requirement.

Now that’s 3/3, but continue all the way to the top to finish the Monkey sanctuary as usual and the “Monkey See” trophy should unlock shortly afterwards.

That’s it! A short and quick guide to unlocking the “Monkey See” trophy from the Ghost of Tsushima Director’s Cut Iki Island DLC. The other trophies for the are pretty straightforward, and should not cause you any problems as long as you complete all the points on the map.

Ghost of Tsushima Director’s Cut is now available on the PlayStation 4 and PlayStation 5. 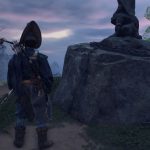 Ghost of Tsushima Director’s Cut has some neat easter eggs for Bloodborne, Shadow of the Colossus, and God of War