Ground zero: A conversation with The Last of Us Part II co-director Anthony Newman

We’ve just put out our first impressions on the upcoming PS4 exclusive The Last of Us 2 and if you haven’t read it yet, we have a couple of words to sum it all up – Very. Very. Very. Very. Good.

Alright, it’s more than a couple of words, but you get the point.

Our full review will be coming out on June 12 but before that, a small number of Southeast Asian media outfits were graciously invited to virtually sit down with Anthony Newman, co-director for The Last of Us 2, to talk all about the game and luckily, we were there to take part in the discussions.

Anthony Newman is a graduate from Brown University and was previously the melee combat designer for the Last of Us as well as the gameplay scripter for Uncharted 2 and 3.

Oh, and remember all of those “Savage Starlight” comics back in the first game? Anthony is also the writer of the acclaimed sci-fi epic!

Disclaimer – some parts of the interview cover topics that are also seen in the recent State of Play presentation and in our first impressions article. No story spoilers will be discussed throughout this interview.

The first question focused on the new gameplay additions that The Last of Us 2 has compared to the first – breaking glass, sliding in between spaces, even a ‘jump’ button. All of these really added a whole new world of possibilities with regards to level design and the overall quality of the game.

Naughty Dog really wanted to make The Last of Us 2 “as complex and rich and surprising an experience as we could and to evolve it as much as possible from the first game” but the challenge was to try to find ways to expand the mechanics without being too fantastical and staying realistic.

Newman explains that “one of the great ways that we’ve done that is with the breakable glass element of the game… it’s kind of such a simple thing. It doesn’t sound very exciting on paper but once you play in the game you realize like it can be used to close off paths to different areas, it can be used as part of puzzles, you can put pickups behind it. And then there’s this interesting question if you’re in a combat space, do you break the class to get the supplies? And if you do, you could potentially attract attention from other enemies… So you have to figure out if you want to take the risk to get in there.”

Newman continues on to say that “level design wise, we really wanted to challenge ourselves to make levels that were as broad as possible while still allowing for a linear story flow, as well as making sure that the player always knew where to go and wouldn’t get lost.“

In addition to all these gameplay mechanics, one thing that The Last of Us 2 adds are the various accessibility options that are included in the game, which is great because it allows a whole new range of players to experience the game. Even with all these options, how did Naughty Dog still manage to keep the tension of the enemy encounters high?

“There’s always going to be somewhat of a tension between Challenge Level and accessibility. Some of our accessibility options do definitely make the game, you might say, easier but at the same time for a lot of our audience, they make the game playable in the first place.”

Newman adds that “I think one of the things I’m really excited about is that for our blind players, we have, I think I’m very excited, we’ve never done this blind accessibility mode where you can play through the entire game completely blind and not only play the entire game you can actually get the Platinum trophy, you can explore all the optional content.“

Utilizing the power of the PS4, Naughty Dog had the freedom to dial up the emotions and animations of the game, which is something they are very proud of. The gameplay really shows all of the smooth and realistic actions, and this is all due to the technical designers that allowed them to control “every aspect of the face like not only being able to do all these expressions, but being able to like push down the fleshy part of someone’s nose or to make someone’s cheeks go red or to make it look like the blood has been drained from someone’s face like if they’re feeling sick or something, or even make their eyes go bloodshot when they’ve been crying or tears tears well up in their eyes.”

“And then on the gameplay side, we have a really interesting, exciting new system where we have a broad range of emotions that all of our characters can feel from like joy to sadness to confusion to fear to rage, and each one of those emotions can be dialed in at a certain value…”

Another improvement that The Last of Us 2 has over the first game is the enemy AI, making enemy encounters more stressful and intense. How was Naughty Dog able to balance the AI improvement without making the game unfair to the player?

Newman pointed out a very interesting tidbit about the first game, saying that if any enemy witnessed a silent kill (via bow or other stealth means), “they would immediately know where you were and it’s because in that game we only had two states – enemies either didn’t know where you were at all or they knew exactly where you were. And in Last of Us 2, we kind of introduced this middle state that honored the fact that if someone witnessed their friend get killed with an arrow in front of them, of course they’re going to be alerted, they know someone did that but they shouldn’t know exactly where it came from, there’s this kind of middle state of vague awareness.“

The Last of Us 2 has improved AI and Newman owes it with the thinking of “I was the enemy, if I was really in this situation, what would I do what would I know, and basically try to give our enemies that that same amount of knowledge and words.”

The whole experience of The Last of Us 2 is really heightened by sound design. Unlike the first game, there is a deeper sense of immersion because of the tension and sense of dread brought about by the audio, which is more present throughout the game over the first.

Newman gives all praises to the sound design team, who had spent a lot of time gathering a lot of material, but there is a new technology used that got the team particularly excited which is called “Murmuration”.

“…It’s basically, you know a lot of games will have a sound for heavy breathing like if you’ve been sprinting for a long time, you will start to hear him do some heavy breathing, but it tends to be very discreet like you’re in one state of like not breathing, and you play this heavy breathing and then it kind of ends. What murmuration allows for is all of our characters have this heart rate that is able to slide up and down, based on events in the world so if you’re sprinting, if you’re in melee combat, or if you’ve just been shot… If the situation is tense, that value can like kind of slowly move up and down, and based on where that value is, it selects from a bucket of breathing loops that all like overlap each other and work seamlessly with each other.“

Speaking of tense situations, one situation you can find yourself in while playing the game is that of your character being able to go “prone” on the ground, basically lie down, which Joel was not able to do in the first game. It was a feature that the Naughty Dog team wanted to add but at the same time proved to be very challenging because of all the new animation states and situations that came along with it.

Newman continues to explain how challenging adding prone was in the game by saying “…but the tension of hiding under a bed, hiding under a truck and seeing enemies go by, or being able to like take them out from underneath there, that just was such a high tension moment, such as cinematic moment that we knew we wanted to pay that cost, but we wanted to make sure that we have, like, the most fluid version of the mechanics so that you can access all your items you can heal yourself, you can craft, you can aim in prone, so that it never felt like a chore to get into it. You always felt capable when you were in there.”

Part of what made the first game truly memorable was the story and how it was told, how it ended. It seemed like the perfect ending to it, and some thought that maybe this second game was not really necessary at all. How did Naughty Dog respond to this and how did they come to a decision about making a sequel?

“One of the reasons people think that it doesn’t need a sequel is because it had such an impressive ending and it had like kind of an amazing ending. But just because something has a good ending doesn’t mean that it can’t have a sequel. I think that, you know, Neil (Druckmann) knew right away that he had a plan for the follow up game, he already had kind of the story in mind.”

Newman also touched on the theme of The Last of Us 2 and explained it rather well. “The Last of Us, I think at its core, is a game about examining humanity. So, first game was about how far love can take you and where love can kind of come from and surprise you. And this game, I think it’s not just that it’s about hate, it’s about the ultimate self destruction of hatred and the hollowness of the pursuit of vengeance. And I think in the world that we live in now I can’t think of a more important message than understanding the futility of hatred and kind of the uselessness of it, and how it ultimately, you know, only has negative consequences for everyone, including the person during the hatred.”

Naughty Dog has poured a great amount of heart and love into the game and it shows. The attention to detail is staggering and the overall experience was just a joy. For now, we’re not able to say anymore than we’ve already had but watch out for our full review soon where we spill all of the beans on the upcoming PlayStation 4 exclusive, The Last of Us 2.

*A few parts of the interview have been edited for readability. 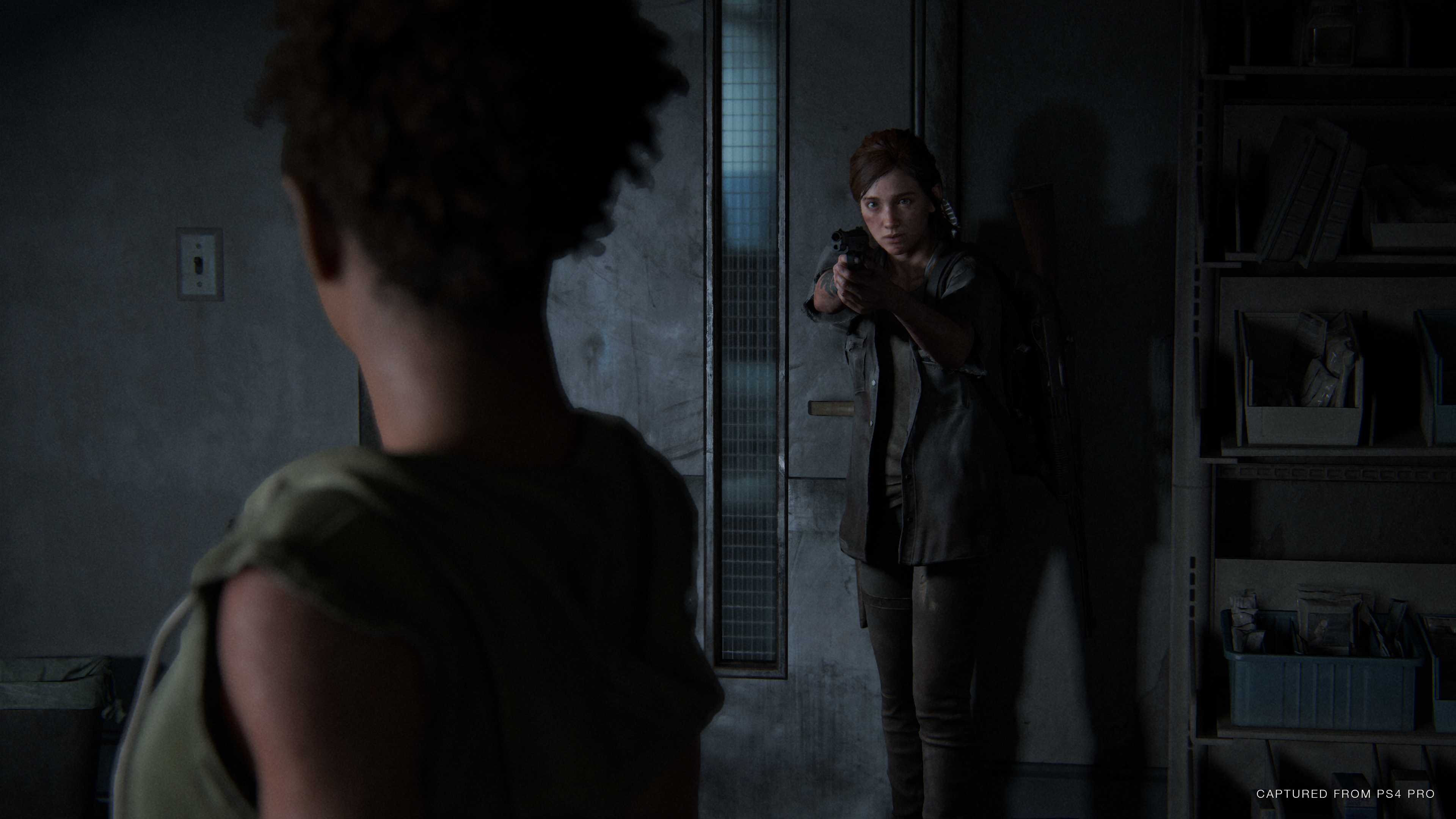 Surface Tension: A relatively Spoiler-free, early preview of The Last Of Us 2

Castlevania Advance Collection rated for the PS4, Xbox One, Switch, and PC