During the recently concluded Xbox Bethesda Showcase, it was revealed that over 20 new games are coming to Xbox Game Pass, most of which are day and date releases, further strengthening the already undeniable value of the subscription service.

While it is a given that first party titles would definitely drop on the Xbox Game Pass, there’s no signs of slowing down for their high profile third party releases including the anticipated Back 4 Blood, all the Yakuza titles including Yakuza Like A Dragon, and the upcoming release of Hades.

Ramping up the 2021 Holiday season with the releases of aforementioned first party titles, 2022 will be a much bigger year as the acquisitions of Xbox Game Studios is coming into high gear. If there is a time to pick up a Xbox Series X, it would definitely be soon as this sleeping giant is slowly starting to wake.

Xbox Game Pass – Coming Day One in The Future

The ninth generation is picking up steam with E3 2021 heralding the upcoming deluge of electronic gaming and 2022 will become a dynamic battlefield to see who prevails in the end. Right now, Xbox is looking mighty. Your move, Sony.

Marvel’s Guardians of the Galaxy announced, coming on October 26 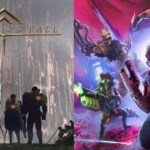