First details for Assassin’s Creed Valhalla revealed, will include raids and settlements

Assassin’s Creed Valhalla is now officially official, as was evidenced by a grand world premiere reveal. You can watch the trailer below:

Ashraf Ismail, creative director of Assassin’s Creed Valhalla, had this to say about the upcoming title:

“We can’t wait for players to experience the incredible Viking journey ahead of them,”

“Being in Eivor’s boots as both a Viking raider and a clan leader, players will face the conflicts of establishing a new home while in the midst of a power struggle for control of England.”

Similar to Assassin’s Creed Odyssey where players got to choose between Kassandra or Alexios, Valhalla will once again allow players to choose either a male or female Eivor, including customization options such as hair, tattoos, war paint, and gear.

The back story for Valhalla is described as follows:

Driven from Norway by endless wars and dwindling resources in ninth century AD, players will lead Eivor’s clan of Norsemen across the icy North Sea to the rich lands of England’s broken kingdoms. Players must carve out a new future for their clan, reliving the ruthless fighting style of Viking warriors with a revamped combat system that includes the ability to dual-wield weapons against a greater variety of enemies than ever before. To secure resources players can lead raids to select locations using their longship to earn much-needed riches and resources. As the Vikings begin to settle in their new home, they encounter resistance from the Saxons including King Aelfred of Wessex, who denounces them as heathens and looks to be the sole ruler of a civilized England. Against all odds, Eivor must do what is necessary to keep Valhalla within reach.

Assassin’s Creed Valhalla is scheduled to release in the Holiday of 2020 for the PlayStation 4, PlayStation 5, Xbox One, Xbox One X, and PC. 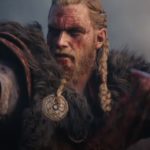 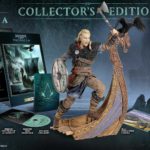